A Star is Reborn: Iconic Seattle Macy’s Star to Return in Time for the Holidays 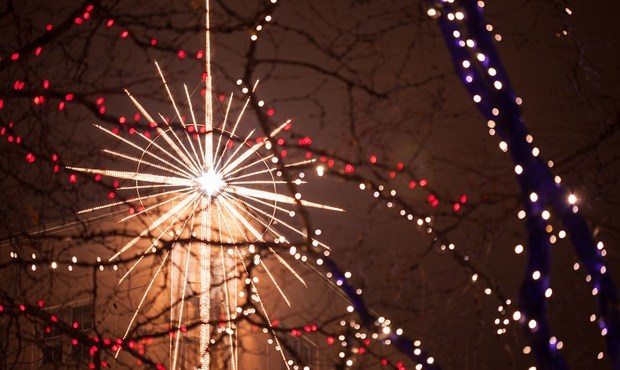 It looks like the iconic downtown Seattle holiday star will be back this year for at least one more time. Sources say a local sign company has been hired to repair and restore the 62-year-old holiday decoration that has graced the old Bon Marche (or, more recently, Macy’s) department store at the corner of 4th Avenue and Pine Street since the 1950s. Workers have been visible on the roof of the building since earlier this week.

When Macy’s announced in September that the store would close in early 2020, it was also revealed that the old star was in disrepair and would not be installed this year. A Macy’s spokesperson said that new owners of the building would display a “reimagined” star next year.

Multiple KIRO Radio listeners had contacted the station when news first broke hoping to learn more about the condition of the star and the feasibility of it being repaired in time for this year’s holiday season. In the past several weeks, Wendy James, daughter of late star designer Bob James, launched a Facebook page and began a campaign to bring the star back.

No details have been confirmed, but it looks like the old star — repaired and refurbished — will be part of the traditional tree-lighting and holiday parade scheduled to take place at Westlake Park on Friday, Nov. 29, the day after Thanksgiving.

This was originally posted on mynorthwest.com by Feliks Banel, and the GettheWReport.com Blog

Related Articles
Economy Matthew Gardner on Post-Pandemic Recovery The “demise of downtown” has been greatly exaggerated, according to Windermere’s Chief Economist, Matthew Gardner. That’s one assessment Gardner made recently, along with other observations about the current housing and job markets in the Seattle area. According to Gardner, those who keep tabs on the real estate market should be careful about reading too much […]
Buying a Home Dreaming of a Bigger Home? Why Not Buy It This Year? Are you clamoring for extra rooms or a more functional floorplan in your house? Maybe it’s time to make a move. If you’ll be able to work remotely for the long-term or your overall needs have simply changed, it’s a great time to sell your house and move up. Why? With mortgage rates in their […]
Local Market Updates Local Market Update – May 2021 A sizeable increase in new listings in April offered some good news for buyers, but it was matched by an even greater increase in sales. With supplies depleted, and homes being snapped up within days, nearly every area saw double-digit price gains. The current forecast as we head towards summer: the market remains as hot […]