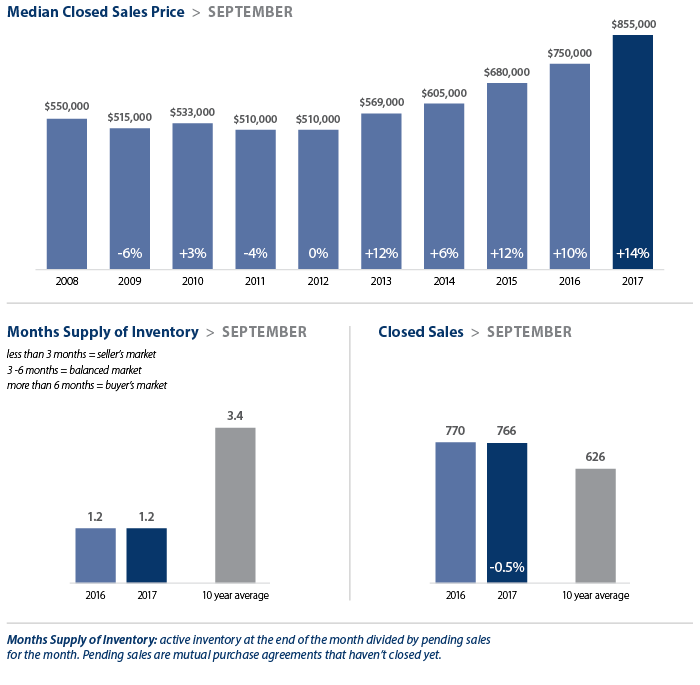 The typical seasonal slowdown of new listings in September added to frustration for buyers who are competing for a very limited number of homes. Strong job growth continues to fuel demand. The state added 83,000 new jobs in the month of August, and September looked to be just as robust. The result? King, Pierce and Snohomish counties all reported double-digit price increases from a year earlier. 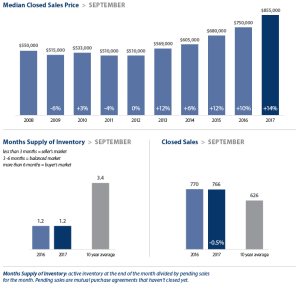 The median price of a single-family home sold in King County in September increased 16 percent from a year ago to $625,000. While down from the record high of $658,000 in July, it represents the highest value for any September since records began in 2000. Among the largest metro areas in the U.S., our region has now led the nation in price increases for the last 11 months.

Seattle’s inventory remains as tight as ever, with homes being snapped up in days. A big hiring push by local employers just keeps adding to the pressure. With supply dwindling and demand soaring, prices had only one place to go – up. In September, the median single-family home price in Seattle soared 15 percent over a year ago to $725,000.

The median price of a single-family home in Snohomish County sold in September was $450,000, a 14 percent increase over the same time last year. With just slightly over one month’s inventory of homes available, it’s unlikely price growth here will slow any time soon.

Related Articles
Local Market Updates Local Market Update – May 2021 A sizeable increase in new listings in April offered some good news for buyers, but it was matched by an even greater increase in sales. With supplies depleted, and homes being snapped up within days, nearly every area saw double-digit price gains. The current forecast as we head towards summer: the market remains as hot […]
Local Market News Local Market Update – April 2020   Despite a bump in new listings the supply of homes still can’t keep up with the demand. The result? Multiple offers, escalation clauses, and record-breaking prices. If you’re considering selling your home, you’d be hard pressed to find a more lucrative market than what we have today. March marked the first post-COVID/pre-COVID comparison, and […]
Local Market Updates Local Market Update – March 2021 Neither the snowstorm nor the increase in mortgage rates dampened buyer demand in February. Lack of inventory continues to be a frustration as there are way more prospective buyers than there are homes for them to buy. As a result, prices continued their upward climb. While the number of homes for sale edged up, it […]